We’re in the News! 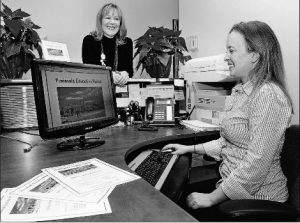 The business – which offers renters access to a private office or conference table, as well as telephone-answering, bookkeeping and administrative services on a pay-per-use basis – was so new, Morris found herself having to explain to people what it was all about. “It was totally foreign,” she said of the concept. “It had to be understood and then more and more people began to realize it makes sense: You don’t have to go into a long-term lease. It’s easier for a company to walk in and not have to worry about staffing.”

Over the years, the virtual office business has grown in its appeal to include a wide range of professionals such as lawyers, accountants, mortgage brokers, salespeople and private counsellors. The globalization of business has also led to an increasing number of foreign-based clients turning to the service. “We have clients in Europe and the United States … (and) clients who travel a lot, like those in the mining industry,” said Carolina Barreneche of White Rock Office Services and Peninsula Executive Suites. “We are a central office where everyone can get a hold of them,” she said.

Morris remains confident the demand for virtual services is not going away any time soon. There will always be those who want to work in a professional setting without the associated costs of a full-time office or the unexpected chaos of a home office. “You can’t be running out to Kinko’s every time you want a photocopy,” she said.